The supply component of HWSM links individual and labor market characteristics to health care workers’ labor supply decisions (Exhibit 3). After the base year, data are trended forward one year. These estimates become the starting point for the subsequent year with the process repeated annually over the projection period.

Supply projections under the "Status Quo" scenario model the continuation of current patterns of:

Under this scenario, supply changes over time are due solely to the changing demographic composition of the workforce and number of new workers trained. Alternative scenarios model the sensitivity of projections to assumptions regarding numbers of workers trained, retirement patterns, and hours worked patterns.

In general, inputs to the supply models are specific to the occupation modeled. However, for some occupations and specialties with small sample size and other data limitations, information on occupational categories or similar occupations were used in place of occupation-specific data.

Exhibit 3: Flow Diagram for the Supply Component of HWSM

This diagram shows how various inputs are synthesized into supply projections. It gives a high-level view of the model. The individual components are explained in more detail in this module. The basic equation is Starting Year Supply plus New Entrants minus Attrition equals End Year Supply. 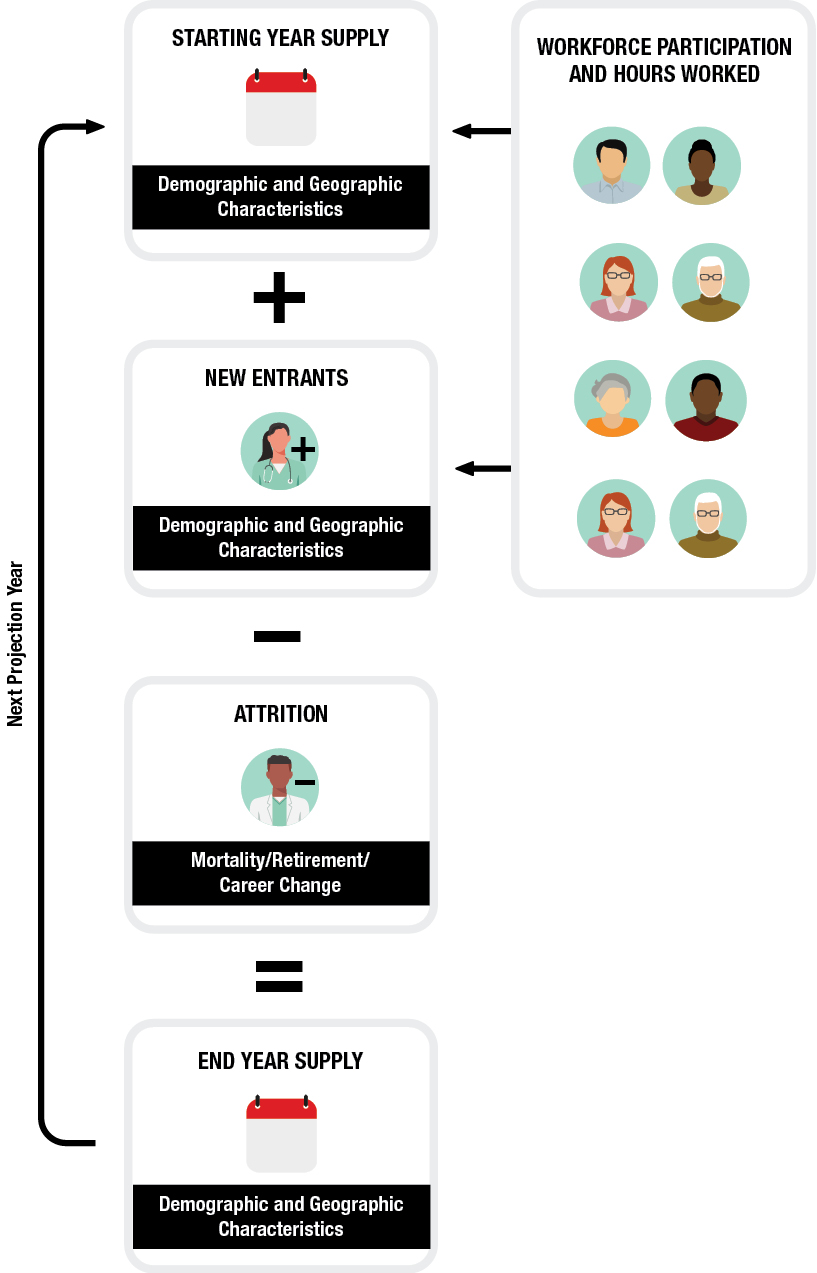 The number of workers leaving the workforce (attrition) comprises those exiting due to mortality, retirement, and career change. The end year supply is then generated, which becomes the starting year supply for the following year.

Data on workforce participation, which informs parts of the supply projections, come from national surveys, survey data from state licensure boards, and occupation-specific surveys. Mortality data for attrition come from the Centers for Disease Control and Prevention.

The starting year supply database in HWSM contains unique records representing each person active in the health workforce. Developing a database of active supply differs slightly by occupation and geographic location based on data source. In general, active supply consists of people who are employed or who are actively seeking employment. For occupations which have national registries (e.g., physicians and dentists) with robust data describing individual characteristics, these registries were used and starting supply is defined as individuals with an active license and no indication of retirement.

For physicians, the AMA Masterfile further defines an active physician as one who works 20 or more hours per week in their profession. For occupations where the starting year1 supply data are estimated from surveys (e.g., nurses2 , technologists and technicians), records for each survey participant who is active in the workforce were replicated according to their sample weight in the survey file. For example, if a person’s record in the American Community Survey (ACS) has a sample weight of 100 (indicating the record represents 100 people in that particular occupation), 100 identical records were created.

Creating a record for each person is important because unique probabilities associated with labor force decisions are used for each simulated person. In states with smaller populations, the creation of multiple records helped “smooth” the impact of individual characteristics on labor supply decisions such as retirement. For these smaller states, samples were drawn not only from that small state but from the state’s Census District.

A few occupations (such as psychologists) use a hybrid of these approaches. If national or state counts of providers are available but demographic information is not available, then the starting population is created by sampling the occupation from the ACS. Survey weights are used with the number of samples determined by the national or state counts. Examples of data sources for counts of providers include the Occupational Employment Statistics (OES) as well as occupation-specific data from licensing agencies or professional associations.

All occupations modeled use individual characteristics (age, sex, and sometimes race-ethnicity) to model labor force decisions. There are some nuances by occupation (for example, education level is modeled for nurses), and such nuances are described in specific occupations sections. Some occupations also use labor market characteristics associated with their state from the Bureau of Labor Statistics (BLS), namely overall state unemployment rate and average professional wages, as inputs to modeling labor force participation.

Modeling New Entrants to the Workforce

Data used to estimate the number and characteristics of new entrants depend on the occupation being modeled. Estimates for new entrants in each occupation over the forecast period are modeled under the assumption that current patterns continue throughout the projection period—except for occupations where there is information on projected expansion of the educational capacity. New entrants to the workforce are defined as individuals who have completed the requirements to practice in their field.

For some occupations, the estimated number of people trained each year minus the estimated number of people who retire each year suggests a net growth in workforce supply that is higher than actual employment level changes reflected in data sources such as OES or ACS. If the number of new entrants exceeds available employment opportunities, then supply for this occupation could exceed actual employment levels or health workers could find themselves under-employed.

Health care workers may leave their current occupations because of retirement, career change, or mortality. The probability of each representative worker dying during a given year is determined using mortality rates by age and sex obtained from the Centers for Disease Control and Prevention (CDC). Age-adjusted mortality rates through age 65 for professional and technical occupations are approximately 25 percent lower than overall national rates for men and 15 percent lower for women.3 4

For many occupations, among living representative workers, the probability of continuing to work in the initial occupation each subsequent projection year is modeled using estimates derived from ACS data. However, workforce participation probabilities for physicians and, starting in 2020, for primary care NPs and PAs, use survey data on intention to retire to develop retirement patterns as described in the subsequent Modules. Analysis of actual retirement patterns or of intention to retire obtained through surveys or analysis of licensure files is the preferred method for estimating retirement patterns when that data are available.

Because the ACS does not list the occupation of individuals who have been retired for more than five years, occupation-specific labor force participation rates were imputed for workers over age 50. The approach for modeling attrition probabilities in HWSM has evolved over the years. Earlier studies calculated attrition rates based on ACS by analyzing net changes in the age distribution of older workers in each occupation to calculate probability of exiting the workforce. Starting in 2018, HWSM began using the ACS question that asks respondents about their workforce participation one year prior to completing the survey. Using this along with the question about current workforce participation, HWSM identifies respondents who participated in the workforce a year ago but do not currently participate, which are assumed to be retirees.

Each year of ACS data involves a different sample of individuals. Comparing the age distribution of subsequent years of samples is subject to fluctuations in sample size for individual age groups—especially at older ages. The distribution of observed retirements by age is recorded to be used in the simulation to model attrition in future years. This applies only to individuals age 50 and older—as younger workers will often exit and then re-enter the workforce. If people change occupations, this information is not captured in ACS, as occupation only is provided for current occupation and not previous occupation(s).

In general, data limitations prohibit express modeling of career changes within HWSM. However, as discussed in The Nursing Model Components, progression from licensed practical nurse (LPN) to registered nurse (RN), and from RN to advanced practice nurse (APN) are modeled for nursing supply.

Where available, hours worked reflects patient care hours; otherwise, hours worked reflects total professional hours. For many occupations modeled, we analyzed the 5-year ACS files using Ordinary Least Squares regression. The dependent variable is number of hours worked per week by each individual active in their profession. Explanatory variables included age group and sex. For occupations where the ACS is used to model hours worked patterns, we also include a year indicator. Race and ethnicity are also explanatory variables when available using the following categories: non-Hispanic white, non-Hispanic black, non-Hispanic other, and Hispanic.

Where possible, we used occupation-specific data collected through: