This module describes the data and assumptions used in the Health Workforce Simulation Model (HWSM) to project the future supply and demand for physician assistants (PAs). The overall modeling approach is described in other modules. PAs work closely with physicians, and PA specialty is generally defined by the specialty of the physician(s) with whom the PA works. Hence, the modeled specialties for PAs overlap the modeled physician specialties.

Supply modeling consists of estimating the number and characteristics of starting year supply, modeling the number and characteristics of new entrants to supply, attrition, and workforce behavior such as patterns of hours worked and geographic mobility. Although some PAs will change specialties over their career, the HWSM does not currently have sufficient information to model that change. This is a potential area of improvement to the model.

Estimating the Base Year Workforce Supply

Estimates of the number, characteristics, practice location, and specialty of PAs used to construct a starting year supply database combine published information from the National Commission on Certification of Physician Assistants (NCCPA) and de-identified individual-level PA data from the American Academy of Physician Assistants (AAPA). NCCPA produces annual reports on the number of certified PAs in each state and the national number of certified PAs by specialty in 2020.1 2 We use estimates of certified PAs by state as the starting point for developing the HWSM supply database for PAs.

HWSM simulates the career choices of PAs, and as such needs individual-level data. While AAPA’s database contains data on most PAs (both AAPA members and some non-members), the file is not as complete as the NCCPA licensure database. AAPA survey data combined with membership files provide flexibility to categorize PAs as working in a metropolitan or nonmetropolitan area and also provide demographic information on PAs. Consequently, we use NCCPA published estimates of the number of licensed PAs in each state and draw a random sample (with replacement) equal to the number from the NCCPA database. For example, if NCCPA indicated that a state had 5,000 licensed PAs then we would draw a sample of 5,000 records from the AAPA database for that state. The AAPA data includes PA specialty, age, and gender which are necessary for supply modeling. We compare aggregate statistics on the number of PAs by specialty in the constructed starting supply file, and add and subtract sampled PAs until the sample matches published NCCPA estimates by specialty.

Taking into consideration the response rate to NCCPA surveys and the percentage of certified PAs who are in non-clinical positions, retired, or working outside the U.S., we estimate the number of active PAs in 2020 (which is not the same as full time equivalents [FTEs]) at 140,827. This includes 35,816 PAs in primary care, 26,148 in medical specialties, 35,554 in surgery specialties, and 43,309 in other specialties.

The mechanism for modeling new PA entrants to the workforce each year is the creation of a “synthetic” population of the profession, based on the number and characteristics of recent graduates in each specialty. Each new PA is assigned an age, sex, and specialty that reflects the distribution seen in recent years.

NCCPA reports 9,443 physician assistants were newly certified in 2020.3 NCCPA surveys new graduates to ascertain the specialty area for PAs who have accepted a position and targeted specialty area for PAs who have not yet accepted a position. Specialty is defined as the specialty of the physician(s) with whom the PA primarily interacts. Supply projections assume that the number, age distribution, and sex distribution of new entrants (Exhibit VII-1) remain the same over time at the most recently observed numbers. The annual number of PAs completing training has grown over time. While the Status Quo supply scenario models the number of new PAs entering the workforce remaining constant, alternative scenarios model different assumptions of higher or lower growth in the number of new graduates.

Source: Estimates based on the 2020 NCCPA Statistical Profile of Recently Certified Physician Assistants.4 The displayed distribution for age might not sum to 100% due to rounding.

HWSM simulates provider attrition probabilities based on the provider’s age, sex, and occupation. Exhibit VII-3 summarizes the cumulative probability that male and female PAs will be active in the workforce after age 50. Attrition probabilities for PAs are based on responses to the question in AAPA’s 2015 National Survey of PAs asking if the PA plans to retire in the next three years. The retirement age distribution of PAs from age 50 to 74 is based on the answers to this question. We assume that all PAs will have retired by age 75. The sample of PAs in many specialties in this survey is insufficient to obtain reliable estimates of retirement intention by age, so the retirement patterns used for modeling are based on all PAs—with separate patterns for male and female PAs. 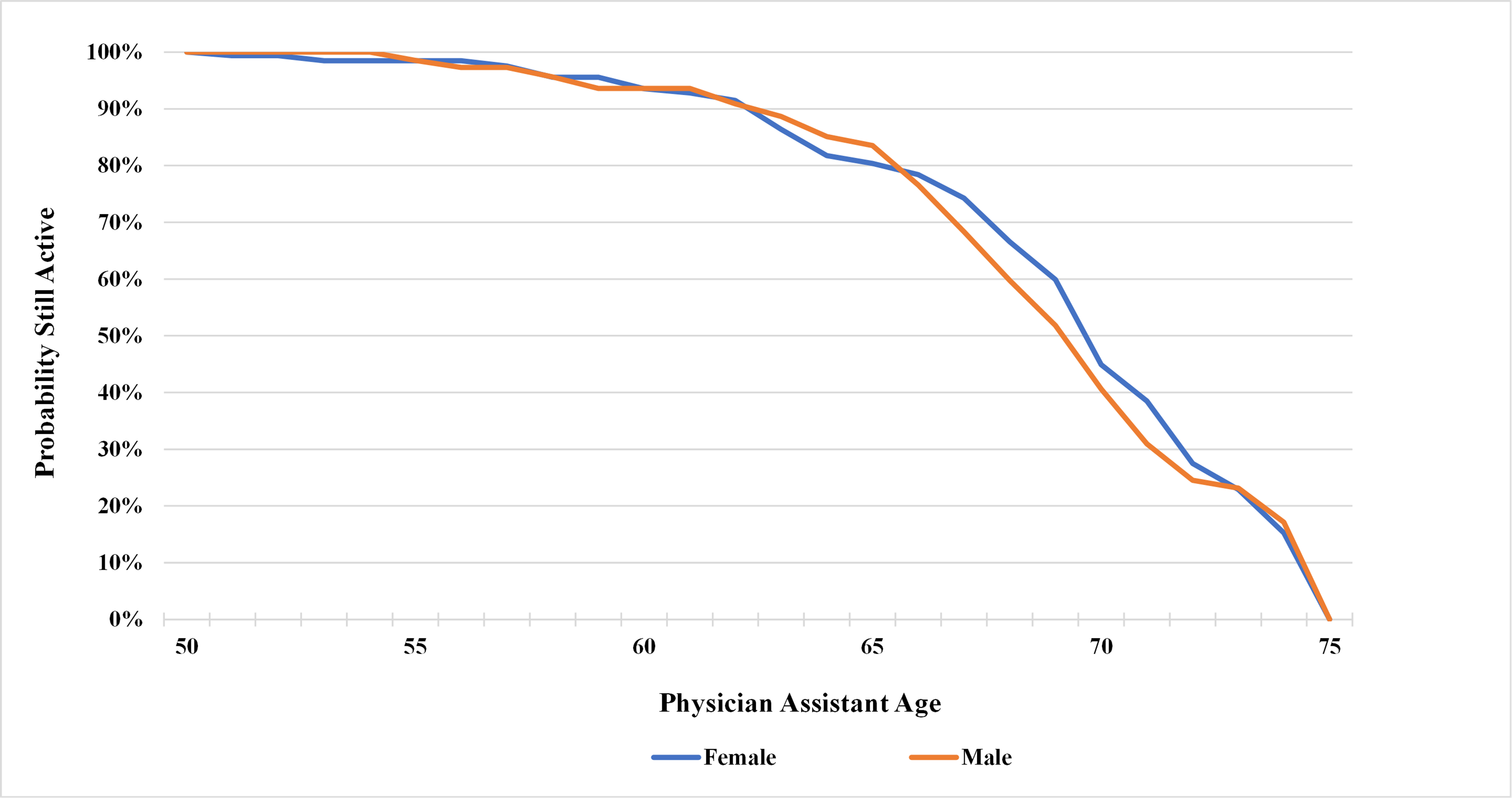 AAPA’s 2019 Salary Survey (n=3,405) collected data on hours worked per week for the primary employer. Using these survey responses, we created hours worked patterns by specialty category for each of the four broad specialty categories (primary care, medical specialties, surgery, and other specialties) as the number of responses is insufficient to create hours worked patterns for each of the 35 PA specialties in the model. Average hours worked per week were 42.25. PAs worked similar hours in the Midwest, South, and West. They worked about 1.9 fewer hours in the Northeast (though not statistically significant). There is no statistically significant difference in hours worked by PAs in metropolitan versus nonmetropolitan areas.

PA hours worked remain relatively steady through age 65, at which time average hours declined for those PAs remaining in the workforce. Hours are lower for female PAs compared to male PAs. Defining a full time equivalent (FTE) as 40 hours per week, total FTE PA supply in 2020 is approximately 6% higher than total active supply. 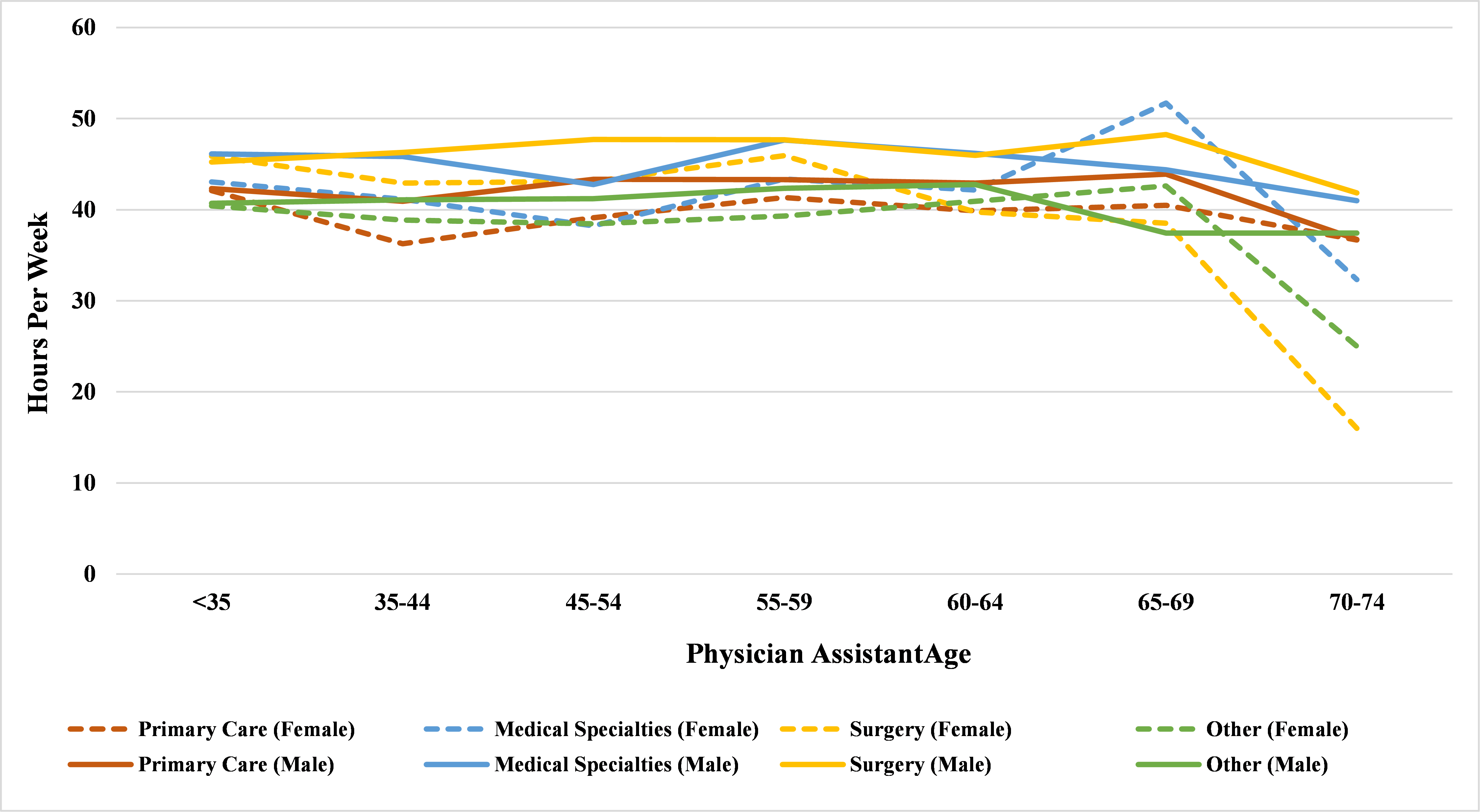 The model accounts for annual movement of physician assistants between states in two steps. First, logistic regression5 using 2016-2020 American Community Survey (ACS) data estimates the probability of a PA under the age of 50 migrating to another state based on their age group, sex, the population of the state from which the person moved, and a year indicator. Comparing each person’s annual movement probability to a random number between 0 and 1 determines which PAs move each year. The likelihood that each person who moves will relocate to a specific state is based on the proportion of PAs moving to that state as observed in ACS data. For example, if 10% of PAs who relocated according to ACS moved to California, then each PA who moves in the simulation has a 10% probability of moving to California. This approach ensures that cross-state migration has no impact at the national level in terms of the number and characteristics of PAs.

The approach to model demand for PAs follows the common model outlined in the other modules. The main demand components are (1) a constructed population file for each county in the U.S. with a representative sample of the population from 2020 through 2035, (2) prediction equations of the demand (i.e., annual expected use) for health care services, and (3) PA staffing ratios. This section focuses on construction of the staffing ratios for each PA specialty for the setting where they provide services.

The staffing ratios are calculated as the national expected health care use in 2020 in the absence of COVID-19 divided by national FTE PAs. This approach models the starting year national demand equal to the national supply for all specialties. Hence, HWSM extrapolates the national patterns of health care use and PA staffing to the local level as well as into the future. Consequently, demand projections are interpreted as the number of FTE PAs that would be required in the future to maintain current national average levels of PA care. To the extent that a larger proportion of future health care services will be provided by PAs (and advanced practice nurses [APRNs]), comparison of future PA supply adequacy should be interpreted in the context of projected adequacy for physicians and APRNs.

Projecting the quantity of PAs demanded has been a historically difficult task because of the overlapping roles that PAs and physicians can play in the administration of health care services. Accordingly, past analyses using HWSM have used physician setting distributions as stand-ins for PA setting distributions when PA-specific data was unavailable. This year, rather than rely upon the assumption that PA setting distributions mirror those of their physician counterparts, we have broken out survey response data from the NCCPA’s “2020 Statistical Profile of Certified Physician Assistants by Specialty” report to formulate a more accurate picture of where PAs work (Exhibit VII-5).6

Throughout 2020, the NCCPA collected survey responses and published summary statistics concerning the specialties and settings of a cohort that reflect roughly 86% of the total NCCPA-licensed PA population. NCCPA published only the five most popular settings for each specialty, though those five settings proved sufficient to model demand. An average of 95% of practitioners in each specialty worked in that specialty’s five most populous employment settings. Family medicine/general practice PAs demonstrated the lowest concentration in its five most popular locations, where 88% of surveyed PAs work in the specialty’s most populous settings. We scaled all setting distributions to sum to 100%.

Multiplying total licensed PAs in each specialty by the setting distribution from the NCCPA survey, and adjusting for hours worked to define FTE as 40 hours per week, produced estimates of FTE PAs by setting and specialty (Exhibit VII-5).

Sources: a NCCPA 2020 Statistical Profile of Certified Physician Assistants by Specialty7 ; b Uses physician setting distribution as PA distribution is unavailable; c NCCPA’s publication does not distinguish between hospital inpatient, outpatient, and emergency settings. The demand driver in HWSM for PAs working in hospitals is inpatient days for all PA specialties except for emergency PAs (which uses total emergency visits as the demand driver). d NCCPA survey respondents include about 15% of emergency PAs working in non-hospital settings—including 3% in provider offices, 9% in outpatient clinics, and 3% in public health/other settings. For modeling, we assume all emergency physicians work in hospital emergency departments as total emergency visits is the demand driver for this modeled specialty.

Dividing estimates of health care use by estimates of FTE PAs in each specialty and setting yields a ratio of demand for services per PA (Exhibit VII-7). For example, dividing the estimated number of office visits to family medicine (n=202,646,000) by the number of office-based FTE PAs in family medicine (n=14,950) yields a ratio of 13,555. This ratio does not mean that PAs provided services for 13,555 patients’ visits, on average, as many patients to a family medicine practice might not have seen a PA. Under the Status Quo demand scenario, if this ratio held constant over time, then demand for office-based PAs in family medicine would grow at the same rate as number of visits to a family medicine practice. For settings where the number of PAs in a specialty is small, that setting category is combined with the largest setting for modeling purposes. The ratios in Exhibit VII-7 are based on unrounded numbers, so they might differ slightly from ratios calculated by dividing the rounded numbers in Exhibit VII-6 by the FTE numbers in Exhibit VII-5.

Note: Ratios calculated as national volume ÷ national FTEs in employment setting. a Insufficient information and sample size to model by setting, so growth in demand modeled as a function of growth in hospital inpatient days by patients admitted for services provided by specialty.

As with other health occupations modeled, HWSM models demand for PA under two scenarios as described in the other modules: